Americans treat rhubarb as fruit, but it’s technically a vegetable, in the same family as buckwheat. Some say that its scientific name Rheum rhabarbarum derives from Rha, the ancient name of the Volga River, on whose banks the plants grow. Others maintain that it comes from the Greek rheo, “to flow,” because of its well-known purgative properties—Catherine the Great’s physicians treated her with rhubarb after she fell ill from eating too many oysters.

Until the early nineteenth century, Russia was at the forefront of the international trade in medicinal rhubarb, which was such a valuable commodity that in the mid-seventeenth century it sold for three times as much as opium

Russians have long used rhubarb in a variety of sweet and savory dishes. They also prize the plant for its beautiful rosy stalks, which bring welcome color to the garden and table in late spring. Russian nineteenth-century chefs adapted this elegant yet easy mousse from French haute cuisine. 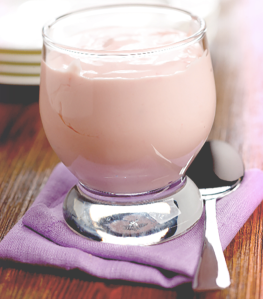 Place the rhubarb cubes in a heavy saucepan along with the sugar and cinnamon, stirring to mix well. Cover and simmer over very low heat until the rhubarb is just tender, about 5 minutes. Strain the juice from the cooked rhubarb into a measuring cup. There should be about 1¼ cups of juice. Reserve the cooked rhubarb.

Rinse out the saucepan and return the rhubarb juice to it. In a small bowl mix the cornstarch with a small amount of the juice, then add it to the saucepan. Cook the mixture over medium heat for about 15 minutes, or until it has thickened and is reduced to ¾ cup.

Stir the thickened juice into the reserved rhubarb. Set aside to cool to room temperature.

In a large bowl whip the cream until stiff, beating in the almond and vanilla extracts. Fold in the cooled rhubarb carefully, until well blended. Spoon the mousse into a large serving dish or into individual ramekins, and chill until ready to serve. Serves 4 to 6.